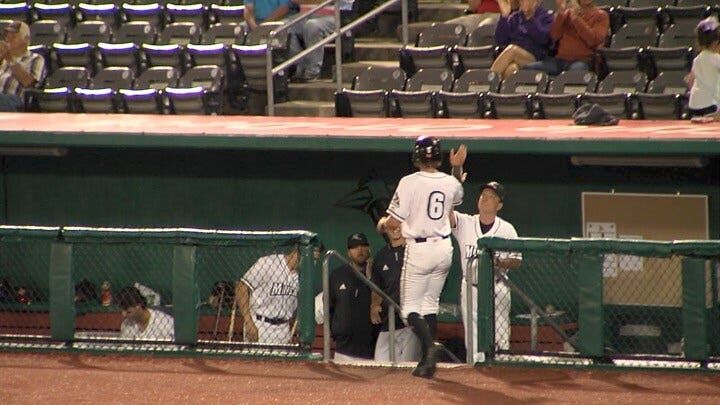 MARION (WSIL) — If it seems as if the Southern Illinois Miners haven’t been home much in the early part of the Frontier League season, there’s a reason.

The Miners played 17 of their first 26 games on road, but Mike Pinto’s bunch opened a six-game homestand by beating Washington 3-2 Tuesday night.

The Wild Things grabbed a 1-0 lead in Cameron Baranek’s RBI double in the second, but Miners’ starter Marty Anderson settled in after that.

Anderson allowed only that one run on three hits while striking out nine in 7 1/3 innings of work.  Anderson had some help in the field, including Jonathan Pryor’s dive catch deep in right field to rob Wander Franco of extra bases to end the seventh.

The Miners offense got going in the sixth.  Bryant Flete hit a solo homer to tie the game.  An inning later, Gianfranco Wawoe’s infield single scored Joe Duncan with the go ahead run.  Then Flete added an RBI single in the eighth to give the Miners a 3-1 lead.

Baranek hit a two-out, solo home run in the ninth off Gabe Gentner to cut it to 3-2.  Brett Marr then singled to put the tying run on for Washington, but Gentner got Saige Jenco to fly out to end it.

The series will continue Wednesday at 6:35.

Highlights as Carterville and Benton baseball pick up wins; Plus High School scores for Friday, May 21, 2021

Catching up with Player of the Week Kane Hixenbaugh

SIU needs overtime to get by Evansville 64-60

Saluki Send off for DeAnna Price headed to Tokyo