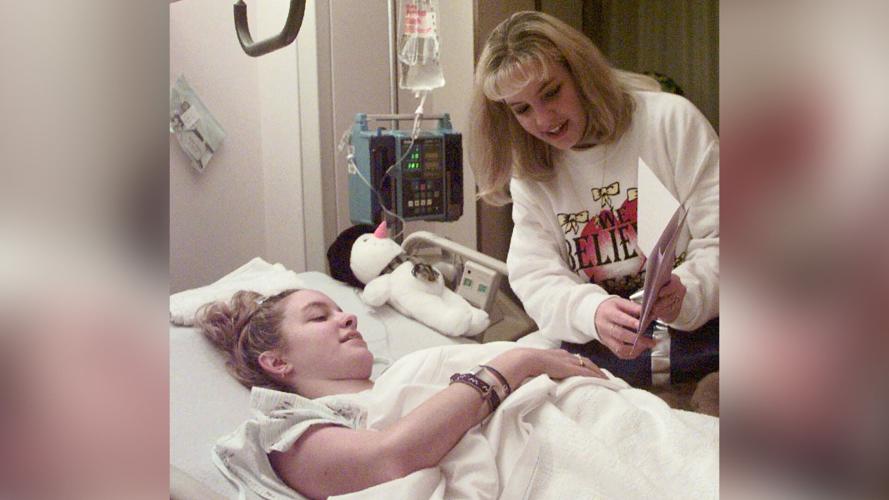 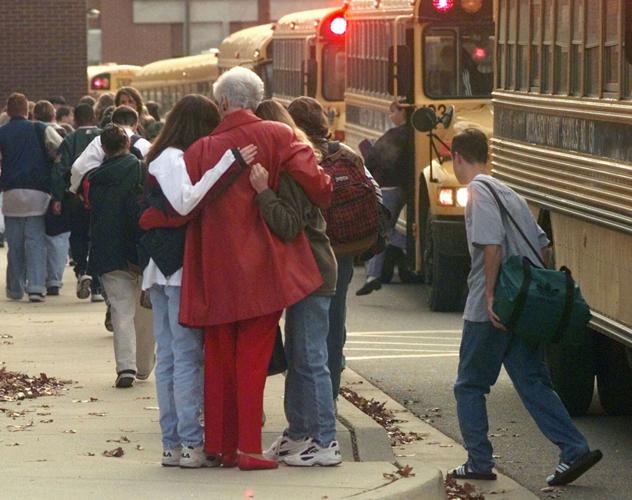 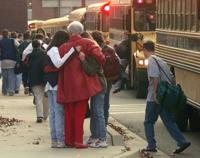 Students arriving at Heath High School in West Paducah, Kentucky, embrace on December 2, 1997, the day after a fatal school shooting. 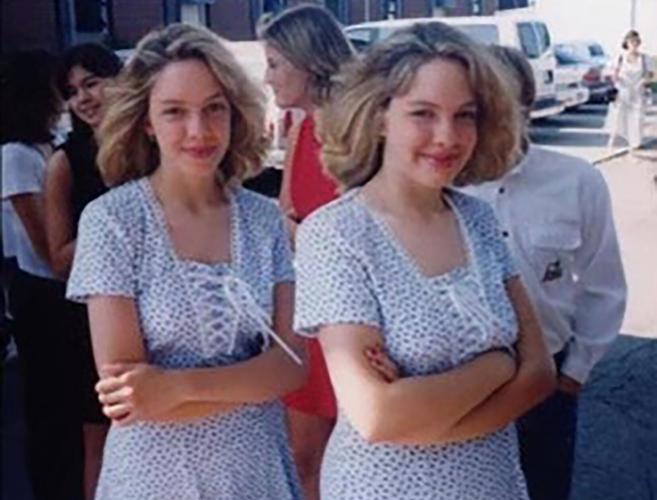 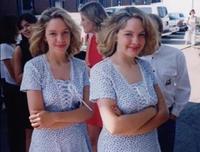 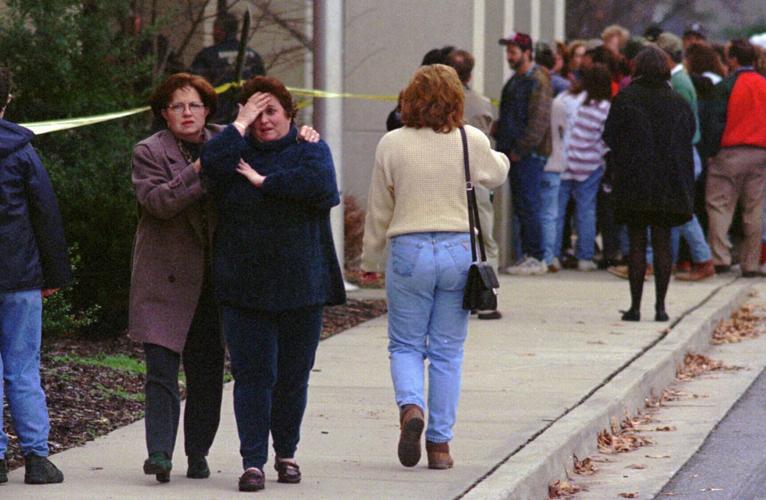 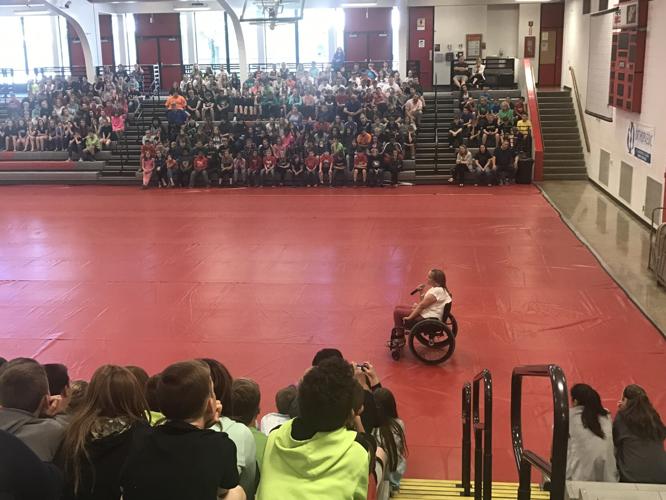 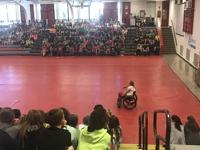 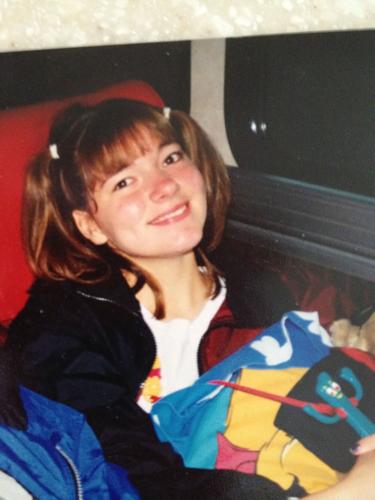 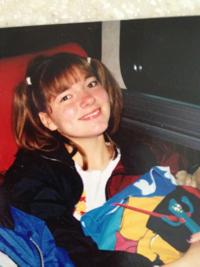 Students arriving at Heath High School in West Paducah, Kentucky, embrace on December 2, 1997, the day after a fatal school shooting.

UPDATE 2 P.M.: The parole hearings will be open to the public, and the first hearings will take place at 10 a.m. Monday and 8 a.m. Tuesday. West Kentucky Community College is providing a viewing area for anyone that wants to watch the hearings.

She remembers the moment, nearly 25 years ago at Heath High School in Paducah, Kentucky, when she first lost feeling in her legs after a bullet pierced her chest and she dropped to the ground.

"I looked at my teacher, and I said, 'Am I going to die?'" Missy, now 40, recalled. Her algebra teacher was kneeling beside her, praying.

Missy was one of eight students who were shot when a 14-year-old boy walked into the school on December 1, 1997, and opened fire in the lobby where students had gathered for a prayer circle. The shooting left three dead and stunned a nation unfamiliar with such violence, as images of school hallways turned into crime scenes revealed the horrors of that day.

Missy was paralyzed from the chest down, and beginning at the age of 15, had to adjust to life in a wheelchair.

The shooter, now a 39-year-old man, is up for parole, and many members of the community are on edge, grappling with the possibility of seeing him go free despite the somber and long-lasting mark the tragedy left on Paducah.

While the shooter pleaded guilty and was sentenced to life in prison in 1998, Kentucky law requires parole consideration after 25 years for minors. His parole hearing is scheduled for Monday.

CNN spoke with some of the victims of the Paducah school shooting and their family members ahead of the hearing. They reflected on what still haunts them from that day, and what they want others to know as their community still grapples with healing.

The scars that remain

In a tree-filled lot across the street from what used to be Heath High stands a circular brick structure. Inside, a stone bearing the image of an angel lists the names of the students who died: Nicole Hadley, Jessica James and Kayce Steger. Behind it, smaller stones on the wall bear the names of those wounded in the shooting.

The memorial is where Christina Hadley Ellegood goes after a hard day, or when the grief of losing her 14-year-old sister Nicole washes over her.

"It represents that our community hasn't forgotten about my sister and the other girls that lost their lives and the ones that were wounded," Christina told CNN.

The memorial, which is located near what is now Heath Middle School, is also where the victims -- now adults -- can take their children to explain what happened that day, she said.

"A lot of the students had to grow up overnight. You didn't feel safe going to school. So then you were questioning where exactly do I feel safe?" Christina said. "I feel like anytime we take away something simple like that, it drastically will change a person."

When Christina, then 15, first heard rumblings about a gun on campus, she assumed someone had brought a paintball gun to school. She later found her sister on the ground with a gunshot wound to her head.

Shock took over her body.

Her sister had been shot in the lobby just after the students' prayer circle said "Amen," right in front of Missy, who later recalled thinking it must have been a joke as what sounded like firecrackers went off.

But then, while standing in front of Nicole, waiting for her to get up, Missy was shot too.

"All of a sudden, I had ringing in my ears and I started to kind of float down on the ground," she said. "Even the impact of hitting the ground didn't hurt."

Going in and out of consciousness, Missy saw her chemistry teacher holding another girl as another teacher repeated, "She's not gonna make it."

"I had no clue that I was watching Jessica die," Missy said.

Now, Missy is preparing to address the parole board Monday as they consider whether to release the shooter, Michael Carneal. She hopes her wheelchair will serve as a reminder of the scars left behind after the shooting.

"The fact that he was the one that made the decision for everyone's future, but the only one who gets the chance at parole, is a bit frustrating because everyone else has been sentenced to life without parole. I'll never walk again. And the girls that were killed will never come back," she said.

Carneal's attorney, Alana Meyer, told CNN in a statement that Carneal has committed to taking medication during his incarceration and that if he is released, he plans to continue his treatment through therapy and medication management at a mental health facility near his parents' home in another town hours away from Paducah.

Carneal was diagnosed with paranoid schizophrenia while he was incarcerated at the Department of Juvenile Justice, according to his attorney.

"Over the past 25 years, Michael has demonstrated his ability to change, rehabilitate, and mature. Michael has always felt deep remorse and taken responsibility for the shooting. He is dedicated to bettering himself and being a positive force in any way he possibly can," Meyer said in a statement.

For Christina, the parole hearing can represent a life-changing moment for many within the community who may no longer feel safe if the shooter is released. While some may feel the shooter has served enough time, she said, the vast majority that she spoke to feel he should stay incarcerated.

"I do believe that he claimed the lives of three girls who did nothing wrong, and they don't get the second chance on life," she said. "So why should he?"

Kelly Alsip was also shot that day, and still bears a scar from the bullet wound on her left shoulder as she prepares to address the parole board.

Kelly recalled her daughter crying when she saw a letter in the mail about the upcoming parole hearing, immediately fearing for her mother.

"I get choked up thinking about it because it's not just me it's affecting," Kelly said.

For those who were there the day of the shooting, they still vividly remember what had happened: the worried parents rushing to the school to find their children, students lining up at the payphone to call them, and what they were doing before the shooting started.

Kelly was holding hands with her best friend, Kayce Steger, at the prayer circle shortly before the shots rang out. Kayce was killed.

"I was the last person to ever speak to her," Kelly said.

Missy was shot by someone she knew, a boy who was with her in band. Someone she viewed as a "class clown," whom she never imagined would carry out a shooting at school.

But now she knows the signs were there.

"I would like to think that if he would have asked me for help, or said something to me, that I would have helped him," she said.

Carneal had brought a gun to school before, and also had warned that "something big" was going to happen at prayer circle that morning, Missy said she later learned.

She had also witnessed him get bullied, and bully others, before the shooting -- at a time when people didn't talk about bullying.

Missy is now an author and public speaker who has dedicated much of her life to addressing at-risk youth and giving talks about bullying prevention -- a role she took on to help stop another act of violence.

"I was hoping that if there was ever a kid there like the shooter at my school, if that person needed somebody to talk to, an adult they can trust, that that was my whole reason into going into that," Missy said.

Missy believes Carneal should still "deal with consequences of his actions," but she is no longer holding onto any anger.

Christina and her brother, Andrew Hadley, also faced a long journey as they grappled with the grief of losing their sister at such a young age. Andrew was 12 and in homeroom when Nicole was killed, and remembers how "everybody was just staring at me" when he was later told to go to the office.

He saw blood on the school floor and someone being taken away in a stretcher, with officers on scene. Then he saw his mother and sister crying.

The trauma from that day has stayed with him, turning into anxiety and depression as he struggled to grasp the reality that his sister was gone, he said. What helped him heal was the birth of his daughter, whose middle name is Nicole.

"I feel that I have like a new mission in life and purpose in life," he said.

For survivors of the shooting, hearing about more recent school shootings can also be difficult. Just this year, there have been 40 shootings so far at K-12 schools.

"I know the pain that they're feeling," Christina said. "And a lot of times there's nothing that I can do to take that away or help them through it."

She had to learn that it was OK for her to limit watching the news about other shootings. But she takes solace in the bond she now has with others who survived the Paducah shooting.

"We know that we'll stop whatever we're doing to support that person because we understand them in a way that no one else does."

And when another school shooting happened in Kentucky nearly five years ago, just 30 miles from Heath High, Christina said she jumped into action.

Christina reached out to those affected by the shooting to offer advice and help the community heal, having gone through her own arduous healing process after losing her own sister at a school shooting.

She had struggled through burying the pain and years of replaying what happened in her head. Talking and writing through her emotions have since helped her, she learned.

Reporting child abuse, neglect can lead to positive changes for the family